His name is Zoomer!

We have expanded the successful CDM Zoom Servo Drive family. Zoom servos for motorized focal length adjustment have been common on professional video cameras for over 40 years.
The Zoomer is a compact and universal zoom motor that can be pivoted to almost any lens by simply mounting it on a 15mm rod. The universal motor unit CDM-UNI-Z2 fits seamlessly into the operating functions of the Sony cameras of the FX9 / FX6 / FS7 / FS5 series. The servo drive is controlled via the zoom rocker on the handle. The motor control can be addressed via Sony's camera-specific protocol and also works independently of the camera signals when a LANC zoom rocker is plugged directly into the servo.
Due to the included Chrosziel Flexi toothed ring (#206-30), the Zoomer can be used with almost any zoom lens even without toothing.
The multi-function handgrip, which in addition to the recording function and a zoom rocker also provide control over the camera menu and other freely selectable functions, are extremely popular on current video cameras with large sensors and are indispensable for effective operation.
The Chrosziel Universal Zoom Servo Drive now allows optimal use of all manual zoom lenses together with the multi-function handgrip. For this purpose, the Zoomer is slid onto a 15mm rod and swiveled onto the zoom lens. Two plug-in cables establish the connection with the camera. One cable is used for the power supply from the camera battery, the second for the connection to the control commands between the handle and the camera.
When using a standard LANC zoom rocker or handle with the Sony PXW-FS5, PXW-FS7 and PXW-FS7II, the servo is connected between the handle and the camera via an input and an output jack to receive all zoom control signals.
For setup with the Sony PXW-FX9 camera, a Y-cable is used that accepts the Sony multi-connector and connects to both the input jack of the Zoomer and the input jack of the camera.
For the Sony ILME-FX6 camera, a Y-cable is used and connects the 3.5mm connector of the Sony handgrip, input jack of the Universal Zoom Servo Drive, and the Sony camera.
The control for the camera operator is very simple. As soon as the Universal Zoom Servo Drive mounted on the lens is supplied with power for the first time, it calibrates itself automatically to the end stops of the lens zoom ring. For all zoom movements, the end stops of the focal length range are then reached with pinpoint accuracy, with optimum protection of the mechanical components of the lens.

Five operating modes are available with the Universal Zoom Servo Drive and can be selected in sequence by pressing the zoom rocker switch for 10 seconds in the TELE end positions:

1. the EB / Documentary mode allows slow zoom travel as well as fast focal length adjustment as required for documentary work. Zoom movements are automatically slowed down at the end of the mechanically given zoom range and give the movement a pleasant transition to standstill.
2. silent mode spreads the response of the zoom rocker in the low range and allows continuous slow zoom movements. The maximum speed is reduced.
3. live / handcut mode allows fast focal length adjustment when working with fixed image angles.
4. direct / raw mode transfers the operation of the zoom rocker directly to the digital motor without program intervention.
5. photo mode supports the use of manual photo zooms by taking care of the uneven stiffness of the mechanical zoomring and applies a higher minimum speed.
A green status LED on the back of the servo housing informs about the advancement from one mode to the next. After power-on, the servo starts with the last selected mode.
The Zoomer can be mounted to the lens on both sides of the Zoom lens and can be rotated. This results in an opposite zoom movement compared to the zoom rocker operation. The turning direction can be switched vice versa by pressing the zoom rocker switch for 10 seconds in the Wide end positions.
The control unit integrated in the Zoom Servo Drive handles the well-known LANC protocol and the newer protocol of the Sony FX series. All cameras with LANC control option without multi-function handle can work with the Universal Zoom Servo Drive without any problems. This requires an additional third-party LANC handle. Which other functions can then be controlled in addition to the zoom depends on the camera type. The LANC protocol only knows 8 speed levels each for zoom adjustments in telephoto or wide-angle direction. The Universal Zoom Servo Drive offers a much higher resolution and can drive the full spectrum of different speeds with the control protocol of the Sony FX series.
For rear camera operation from a tripod, there are zoom rockers with LANC protocol attachable to the pan lever on the market. The usual 2.5mm jack connector plugs directly into the bottom of the Universal Zoom Servo Drive.
The Universal Zoom Servo Drive is powered by a 5pin Lemo connector with a voltage of 10-30V and has a maximum consumption of 350mAh at 12V. Power is supplied from the camera, from the camera's battery adapter plate or directly from a D-Tap connector on the battery. Power cables are available for all conceivable connectors, such as Hirose 4Pin, Fisher RS 3Pin, D-Tap, Lemo 7Pin/2Pin and others. For cameras with integrated start/stop function in the power connector, the Universal Zoom Servo Drive controls the recording function of the camera like ARRI Amira, Alexa, Alexa Mini and others.
The power supply of the Universal Zoom Servo Drive has a reverse polarity protection to prevent short circuits when the D-Tap cable is plugged in incorrectly. To protect the signal line from unwanted voltage transitions to the camera, the LANC socket on the servo has been optically decoupled.

The Zoomer is a compact and universal zoom motor that can be pivoted to almost any lens by simply mounting it on a 15mm rod.

Controlled via Sony and LANC handgrip

As always, we would love to hear your thoughts and first impressions.
For quotes or to schedule a demo call us at +49 89 901 091-0 / info@chrosziel.com, or get in touch with your dealer.
> Chrosziel dealer locator
> Visit here to preorder and accessorise
> Watch our overview video here 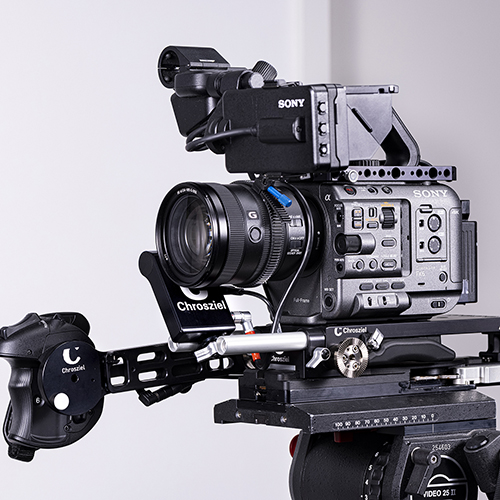 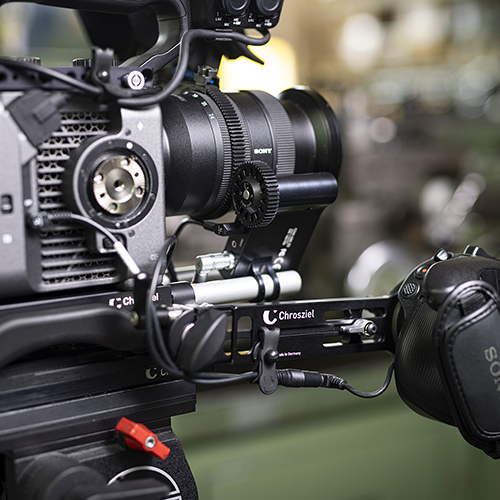 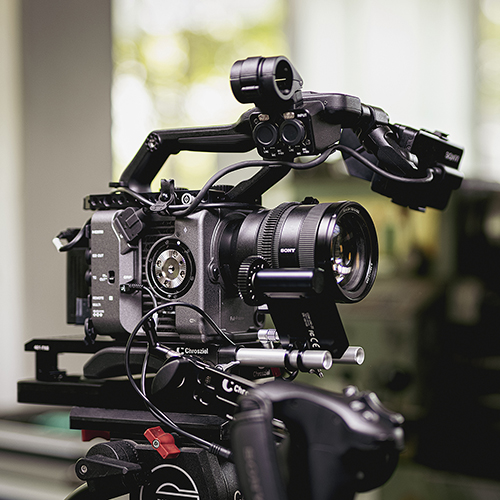 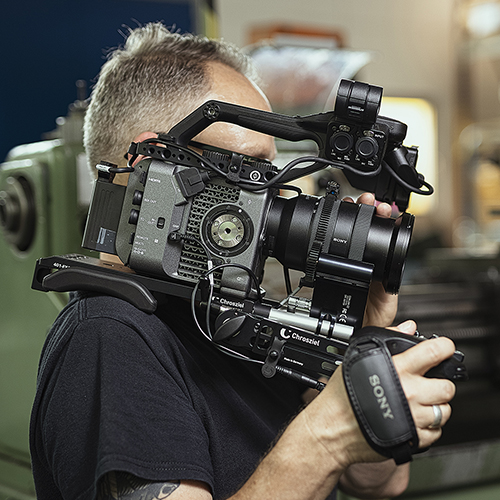 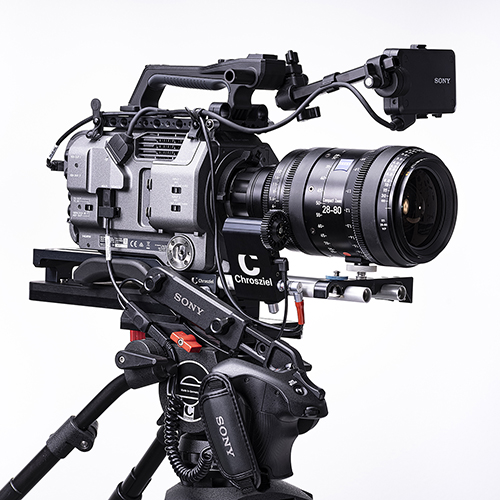 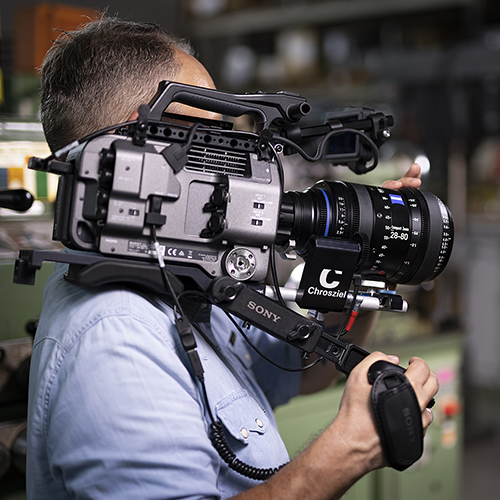 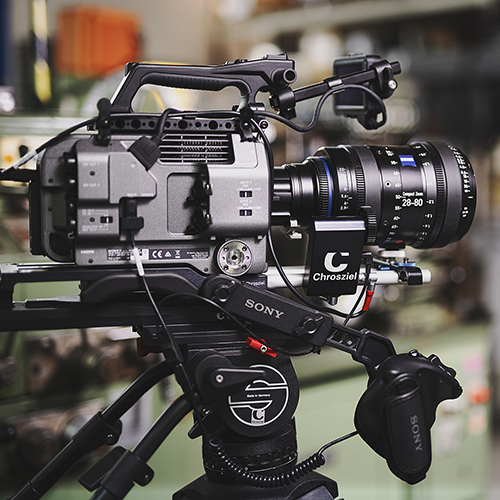 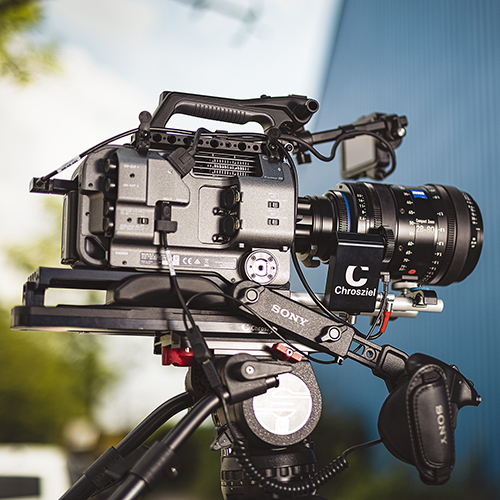